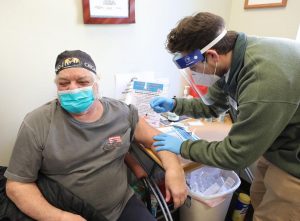 Gratitude is evident at Hazle Drugs Inc., where COVID-19 vaccinations are administered.

“We have people literally crying when they’re getting it. People who haven’t seen their grandchildren in eight months. People with family overseas that they couldn’t see,” said Bill Spear, pharmacist and owner of Hazle Drugs in Hazleton.

That is exactly why the pharmacy decided to administer them.

Phones have been ringing off the hook since Tuesday with people eager for an appointment as pharmacy workers across the region navigate through an increased workflow due to the vaccine. It’s tradition for Hazle Drugs to pitch in in times of crises, just as it did in 1918 during the Spanish Flu and in the 1950s during the polio outbreak.

We’re very busy and hectic (right now) but we knew that getting into this,” said Spear. Hazle Drugs signed up to distribute the vaccine because of its commitment to the community.

“It’s stopping the spread of it,” he said, bringing communities closer to herd immunity.

Unfortunately, getting the vaccine doesn’t affect the need for social distancing at the moment, said Dr. Michael W. Evans, medical director at Lehigh Valley Physician Group-Hazleton. Precautions like social distancing, hand washing and mask wearing are still necessary until the population gets closer to herd immunity, which is when 70% of the population is vaccinated, he said. At that time, social distancing restrictions may be lifted, but Evans said people should continue to follow guidance from the state Department of Health after vaccination.

People previously infected by COVID-19 are still recommended to get a shot. Evans said they should wait until they are

asymptomatic and out of quarantine to get a vaccine, though.

Pharmacies were permitted to dispense the vaccine once they had staff certified to give immunizations, Spear said. Hazle Drugs also had to ensure a socially distanced and disinfected space to vaccinate. Once approved to dispense the shots, Hazle Drugs was uploaded to the state Department of Health’s vaccine location map. Spear said they began giving shots Tuesday, dispensing hundreds of them and quickly filled up available appointments through March.

Spear is hopeful a steady flow of vaccinations will allow his pharmacy to accept new appointments. Patients are told to check hazledrugs.com to see when appointment openings are available. A message asks people not call the pharmacy to follow up on requests as they will be handled in the order they are received.

Spear’s workers are explaining to customers that it’s important to get the second dose and are scheduling the second dose during their first appointment. They’re also reminding people that they still need to take COVID precautions post vaccine and to look at the vaccine as “an insurance policy,” because having herd immunity is the ultimate goal.